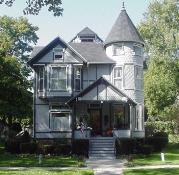 Of radically different character than the Second Empire style was the Queen Anne style, found in Porter County during the 1880s and 1890s. The style originated in England in the 1870s and was an informal blend of 18th-century English architecture and earlier medieval motifs.

As the Queen Anne style spread across the United States, it lost much of its 18th-century character and acquired a vague resemblance to late medieval English architecture. An American contribution to the style was the profusion of wooden ornamentation and the substitution of wooden facade shingles for clay tiles found in the English counterparts.

Key Features
The style typically involved asymmetrical massing, irregular fenestration, diversity of wall treatments and projecting bays, and a feeling of forced informality. These buildings were statements of individuality and uniqueness in an ever more regulated and mass-produced world. The style was used chiefly in domestic architecture, though occasionally in commercial architecture, and is often synonymous with the popular conception of late Victorian architecture in America.

Local Examples
The county's best examples of the Queen Anne style are found in urban areas. The house shown above is a particularly fine example. The style's trademark tower, asymmetrical massing, and use of decorative wood elements are executed with fine craftsmanship on this house.