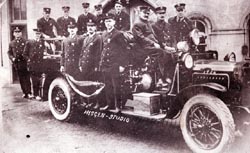 Early Equipment
The Valparaiso Fire Department was first organized in 1867. A hook and ladder company was organized, and the first engine house was built on the East side of the courthouse square. The equipment was pulled by the Firemen from 1867 - 1898. That year, Valparaiso purchased its first team of horses, Fred and Charlie, who were named after City Councilmen Fred Shoemaker and Charles Gogan. These councilmen were instrumental in the purchase of the horses, as well as a new engine. The new equipment and horses were then housed on the South side of the courthouse.

There were two stalls in the back of the station and the harness, pre-connected to the fire engine, hung from the ceiling. When a call came in, the horses would move to the harness, and it would drop and lock onto them. Fire engines were pulled by horses until 1920.

The First Motorized Fire Engine
In May 1920, the City Council, in a four-to-two vote, decided to buy a motorized fire engine for $6,372.25. It was a 1.5-ton service truck, manufactured by the Service Automobile Company of Wabash, Indiana. The chassis were made in Wabash, but the truck had to be driven to Kenosha, Wisconsin to have the firefighting equipment installed. The truck was used for 3 years, and was replaced in 1923, when it was found that the only way it could make it up Mechanic's Hill (East of Morgan on Indiana Avenue; toward the current Valparaiso University) was if the Firefighters helped push it.

At the time the 1920 truck was purchased, the city had two paid teamsters (John Deardorf and George King) to drive the horses; however, these men were unable to drive a motorized vehicle. So, on December 3, 1920, Wilbur "Fish" Cowdrey was hired, because he had been a truck driver in World War I and had a driver's license.

Present-Day Fire Protection
Many changes have taken place over the years. Apparatus capabilities have changed, equipment, gear and technology continue to improve, personnel have been significantly added to accommodate demand, our shifts have drastically changed from what they originally were, the demographics of the Department are more diverse, and emergency medical pre-hospital care and transport has been created and continues to expand and evolve. Today, the Fire Department has three shifts of 21 Firefighters per shift, working 24 hours on duty and 48 hours off duty. We have three stations, four engines, two aerials, five rescue trucks, a boat, a squad, a rescue trailer, and a brush truck. We protect 30 square miles of homes, industries, businesses, many schools, a college university, an airport, and more than 45,000 residents.