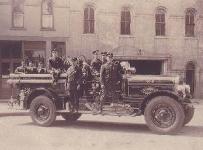 Arrival in Valparaiso
Betsy was shipped by rail car, and was side-tracked behind the Smith-Nuppnau Planning Mill west of McGill’s office building; today’s Dodrill’s Plumbing and Heating. Betsy had not yet been tested as required by the insurance companies of the day, and could not go directly into service when unloaded. Betsy had to remain in that location until it could be tested.

The only fire apparatus owned by the city was a 1920 chemical truck that replaced the old horse-drawn units three years earlier. Motorized fire engines were in their infancy, and there were no trained fire truck mechanics in the area, leaving the fireman to undertake all repairs.

First Response
On June 20, 1923, a fire alarm was sounded for a structure fire at the Smith-Nuppnau Planning mill. The Firemen responded with the 1920 chemical truck that had been repaired earlier in the day. While the Firemen were fighting the fire, the chemical truck itself caught fire. Left with no way to extinguish the Planning Mill fire, it was apparent that the McGill’s office building next door would soon catch fire. Because of the extreme situation, the insurance underwriters who were in town to certify Betsy, allowed her to be off-loaded and used to extinguish the fire. The McGill’s office building was saved; however, the Planning Mill was destroyed. Betsy was utilized from that day on, apparently after passing her real-life "test".

Freight Train Explosion
One of the more unusual fires that Betsy responded to was on January 9, 1924. A locomotive of a freight train moving West on the Nickel Plate Railroad exploded in front of the Valparaiso Depot. The explosion killed two railroad men and injured another. The Depot was untouched; however, several homes in the area were set afire by engine grates, which flew through the air and crashed through the sides of the buildings.
Car Seat Program
Inspections Bureau
Fire Prevention & Outreach
Out to Alarm Valpo