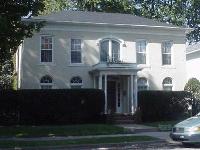 Reasons for the Style

Around the turn of the century, the Colonial Revival style gained prominence and has retained much popularity throughout the 20th century. Several factors accounted for this style's popularity including:


Historical accuracy in the Colonial Revival style was really confined more to specific elements than to the building as a whole. For instance, a Colonial Revival house is usually of much larger scale than its 17th- or 18th-century prototype, and it may bear the influence of more than one phase of the colonial period. Elements of the style include dentils, heavy cornices, entrances with fanlights and sidelights, pedimented dormer windows, keystones, and quoins.


Most of the county's examples of the Colonial Revival style are residential buildings.